Exploring the human myofascial structure and their mutual dependence on stress- and trauma regulation systems. Developing an evidence-based protocol that draws from a number of different fields including research on the autonomic nervous system, brain science, memory systems, mindfulness practices, attachment, relational object theory and infant research. On the basis of body psychotherapy and the different modalities, the research on Somatic Memory model combines techniques to a bottom-up intervention that effectively addresses underlying trauma.

Background: The field of trauma therapy is changing dramatically and a new generation of therapy is emerging. Current research shows that at the root of many physical and mental health diagnoses is trauma, specifically early childhood wounds of abuse and neglect. The research is so compelling that it suggests working in the mental health field is essentially working with traumatic wounds. As clinicians, we have come to know this, but until recently have not had effective tools to help resolve the tenacious roots of our clients' suffering.

View the Center for TRAUMA RESEARCH & Effectiveness of Body Psychotherapy.

Access to the Present Moment: TraumaSomatics®, The Reorganization of the Somatic Memory System

IASI Yearbook 2007. Herbert Grassmann and Christina Pohlenz-Michel.Dr. Herbert Grassmann is one of the co-founders of SKT® Strukturelle Körpertherapie, and TraumaSomatics®. He is an Advanced practitioner from the Guild for Structural Integration, Certified Hakomi Therapist, and later trained with Dr. Peter Levine. He combined principles from these three methods and subsequent experience to create and teach the traumatherapeutic method TraumaSomatics®. His website is: www.traumasomatics.de.Dr. rer. nat. Christina Pohlenz-Michel works in Freising, Germany, with Bodyoriented Psychotherapy, Tattva Therapy and TraumaSomatics®. She has been a toxicology consultant for national and international organizations since 1988,incorporating knowledge from medicine, molecular and cellular biology, biochemistry, and biophysics. Her website is: www.seele-und-koerper-imdialog.de.“A trauma has less to do with conscious memory but with the inability to calm down the somatic reactions.”- Bessel van der KolkThe essence of TraumaSomatics® Knowledge originating from neuropsychology, psychotherapeutic and somatic therapeutic methods, as well as from medicine and biosciences, combined with modern models of trauma therapy make it evident that the somatic level plays an essential role for development, fixation, and resolution of trauma. 3, 7 -9.TraumaSomatics® is a therapeutic method that is based on the reorganization of somatic memory located in what we call the SomaNet. An essential characteristic of this therapeutic method is that we work with somatic sensationsand movements to resolve somatic traces of the traumatic experience. Both the calming down of the nervous system and changes in the structural and molecular net contribute to these processes.TraumaSomatics® works with the human memory system which can be differentiated into semantic, episodic and procedural memory (see also readings from Allan Schore1, John Grigsby and David Steve ns2, Bessel van der Kolk3, and Eric Wolterstorff4). The therapeutic objective is the separation of these memory systems in order to work with them individually. The work with episodic memory via the somatic memory system integrates the traumatic experience.Procedural memory gives access to trauma - dependent patterns of behaviour, and the learning of abilities represents an important resource. Semantic memory supports the client in his autonomy and in managing the sequels of stress and trauma.All these therapeutic tools support the development of the ability to recognize that the traumatic experience is in the past giving the clients access to the present moment.Starting points for a somatic trauma conceptTraumatic experiences are generally accompanied by enormous stress and complex patterns of sensory input that are threatening and painful in an extreme way. The traumaticsituation mostly appears like an unexpected attack leading to a state of shock. A trauma is connected with the experience that there is no opportunity to solve the situation and there is a deep sensation of being overwhelmed. The situation gets out of conscious control because the processing and storage of incoming traumatic information becomes uncoupled from higher brain functions. The reactions of the threatened human, which are orientation, fight, flight or freeze, are now driven exclusively by the autonomic nervous system. According to Janet (see Ogden 5) this condition can be regarded as a constriction of the conscious field obstructing Somatic therapy methods like Structural Integration, Craniosacral Therapy and Osteopathy have recognized that work at the tissue level is essential for the development, fixation and resolution of trauma.12-14 Even a purely psychic trauma leaves traces in tissues and cells in the same way a physical injury does.Psychotherapy, up to now, had no mechanistic models to understand how trauma and soma are bound in a somatic memory system. We have created the SomaNet model to describe the somatic side of trauma.The SomaNetThe model of the SomaNetFigure 1: The principle of the SomaNet The subunits of the SomaNet propagate and store information both on their own but also in close cooperation thus forming a soma - wide information network.Stress and trauma call for managing an excess of information, both from the outside to the inside of an organism and between the 50 billion cells, and different organs and tissues of the human body. The SomaNet model describes the highly linked and cooperating somatic network of information and communication which is characterized by self-organization and the capability for dynamic change. Our model combines experience from somatically orientedpsychotherapy, trauma therapy and somatic therapies with recent research in medicine, neurobiology, cellular and molecular biology, biomechanics, physiology, biochemistry and biophysics. 15- 21 This model uses our understanding of the processes of communication and information exchange in the context of stress and traumatic experience, to find solutions to the sequels of trauma and the reorganization of somatic memory.In the SomaNet model we categorize somatic intelligence in individual subunits designated as: the structural net, the molecular net, and the nervous system (Figure 1 and Table 1). The state of the components of the SomaNetis intimately connected with our well-being since traces of stress and trauma can be the cause of cell and tissue imbalances, leading to symptoms and the diagnosis of “dis-ease”.Continued on page three of attached. The Reorganization of the Somatic Memory System.pdf 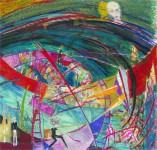 The Scene of the Crime: Traumatic Transference and Repetition as Seen Through Alfred Hitchcock’s Marnie

Published in International Body Psychotherapy Journal The Art and Science of Somatic Praxis. (formerly US Association for Body Psychotherapy Journal)Received on 22/07/2013. Revised 120/1/2014AbstractThis essay presents an integrated approach to treating traumatic transference dynamics. Our theory integrates findings from the family therapy literature, principally the contributions of Murray Bowen; new understandings about memory from the field of neuropsychology, most clearly expressed in the writings of James Grigsby; and insights into the behaviour of the autonomic nervous systems of people after they have been stressed or traumatized, as modeled by Peter Levine. Our work integrates these three literatures into an approach to addressing the complex interpersonal dynamics that arise when psychotherapists work with clients who have experienced a particular class of traumas which we call “in-group traumas”, which is to say, those clients who have a history of involvement in traumatic incidents in their families, schools, churches or other tightly knit groups. Because of the close and ongoing nature of relationships in these groups, memories of traumatic experiences in such environments can be more complex than memories of car accidents, surgeries, or even an attack by a stranger. We propose a way to conceptualize these memories of “in-group” traumas. To do so, we rely on five ideas: 1) It is useful to simplify people’s behavior during a traumatic event into four roles: Savior, Victim, Bystander, Perpetrator. A single individual might play more than one role, even during the same event. 2) Individuals playing any of these four roles can develop posttraumatic symptoms. 3) Traumatic reenactment can be accounted for through the mechanism of projective identification. 4) During a traumatic event, we remember not so much what happened to us alone, but rather our subjective interpretation of the entire traumatic event itself; we remember the scene of the crime. 5) Healing from a complex relational trauma requires integrating all four posttraumatic roles and, through them, the whole of the traumatic event. Identifying with one of the roles and disidentifying with the others, as is usual, leaves clients with a superficial misinterpretation of what they actually remembered because, during the original traumatic event, they also remembered what they imagined at that moment to have been the experience of others present. To conclude, we describe the implications of this interpretation for clinical interventions. Throughout, we use a (fictional) case study accessible to any reader, Alfred Hitchcock’s 1961 psychological thriller, Marnie.Click here to continue reading article..Wolterstorff & Grassmann - Scene of the Crime IBPJ 13_2 2014.pdf